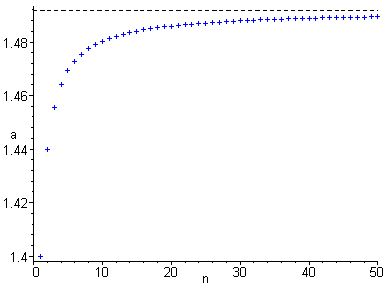 Two properties of this sequence can immediately be seen from the figure above: In the lecture mathematics 1, the natural exponential function


will be studied in detail. 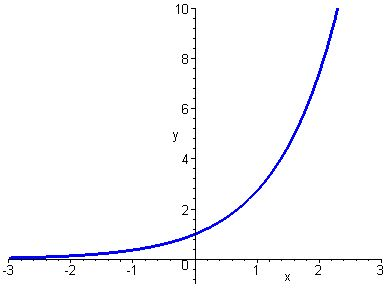 The natural exponential function
There, the following statement will be shown:

For an arbitrary number , we have

For , the limit of this sequence is Euler's number (named after the Swiss mathematician Leonhard Euler, 1707-1783):


It can be shown (with some difficulty) that Euler's number is an irrational number, and hence it cannot be written as a fraction. The exponent rules apply to the natural exponential function with arbitrary real numbers as its exponents: Information on the compound interest process can be gained if the number of times gets very large using the exponential function and the relation to the sequence : the capital is multiplied by a factor of every year if the interest at a rate of is credited to the initial capital at different times in the year. After  years, , the initial capital has increased to


If , the limit of this sequence is


For increasing the interest is paid more and more frequently:

The limiting case is called the continuous compounding interest. For positive real numbers , the formula


specifies to which amount an initial capital has increased after  years if continuous compounding interest is applied at a rate per year.

An investment of EUR is deposited for  years in a bank account where continuous compounding interest is applied at a yearly interest rate of . After  years, this results in an investment of