Section 10.1 From Arrows to Vectors

Two vectors are equal (written as ) if and only if they satisfy one (and hence all) of the following equivalent conditions:
From the statements in the Info Box above we see that two vectors of different dimensions (i.e. and ) can never be equal. Since these vectors have a different number of components, they are not even comparable. Thus, vector operations are only carried out on vectors with an equal number (two or three) of components , and these operations will always result in a vector with this fixed number of components.


The zero vector or plays the same role for vectors as the number for the real numbers:

Consider two vectors and . Then, we have 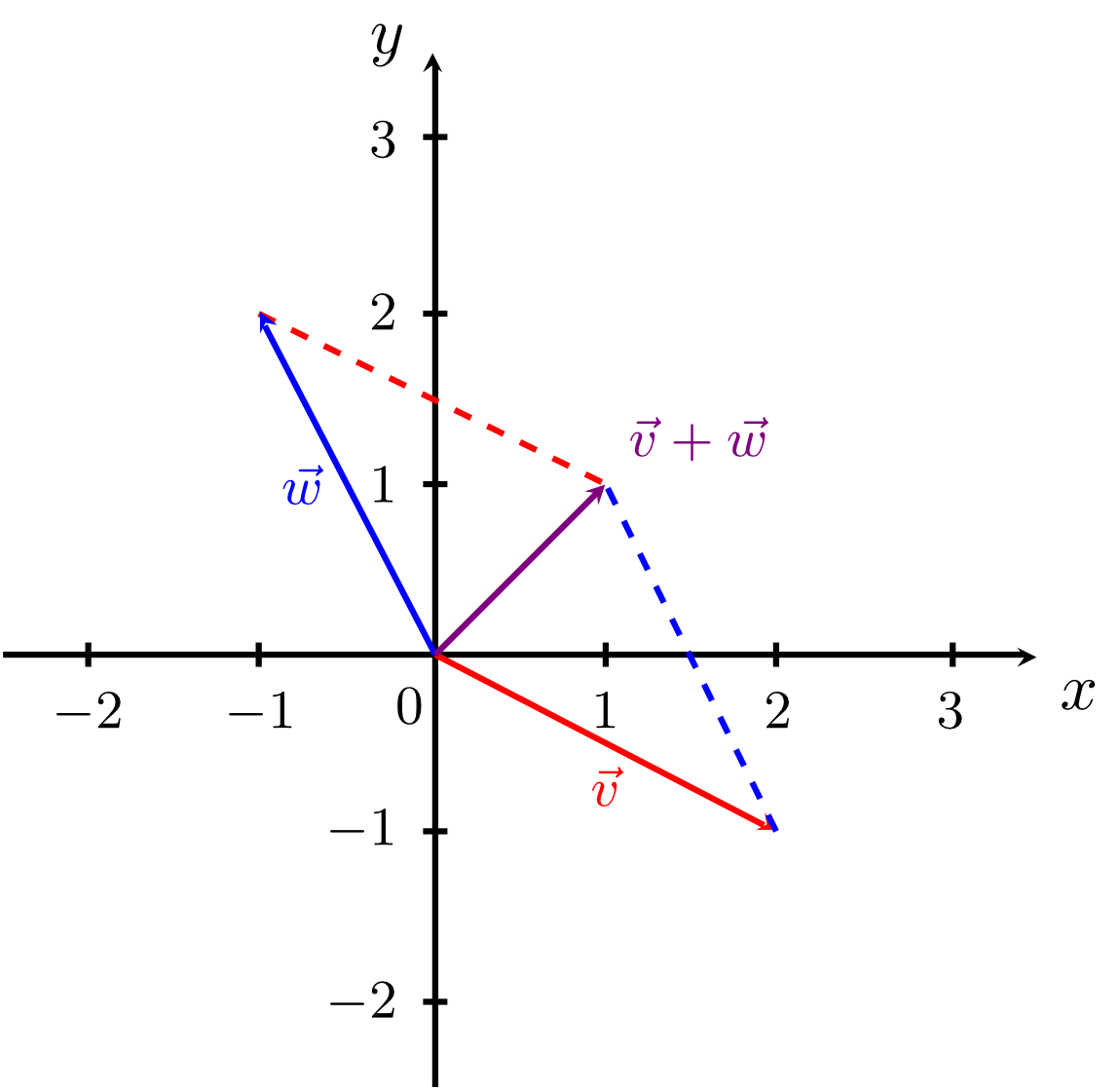 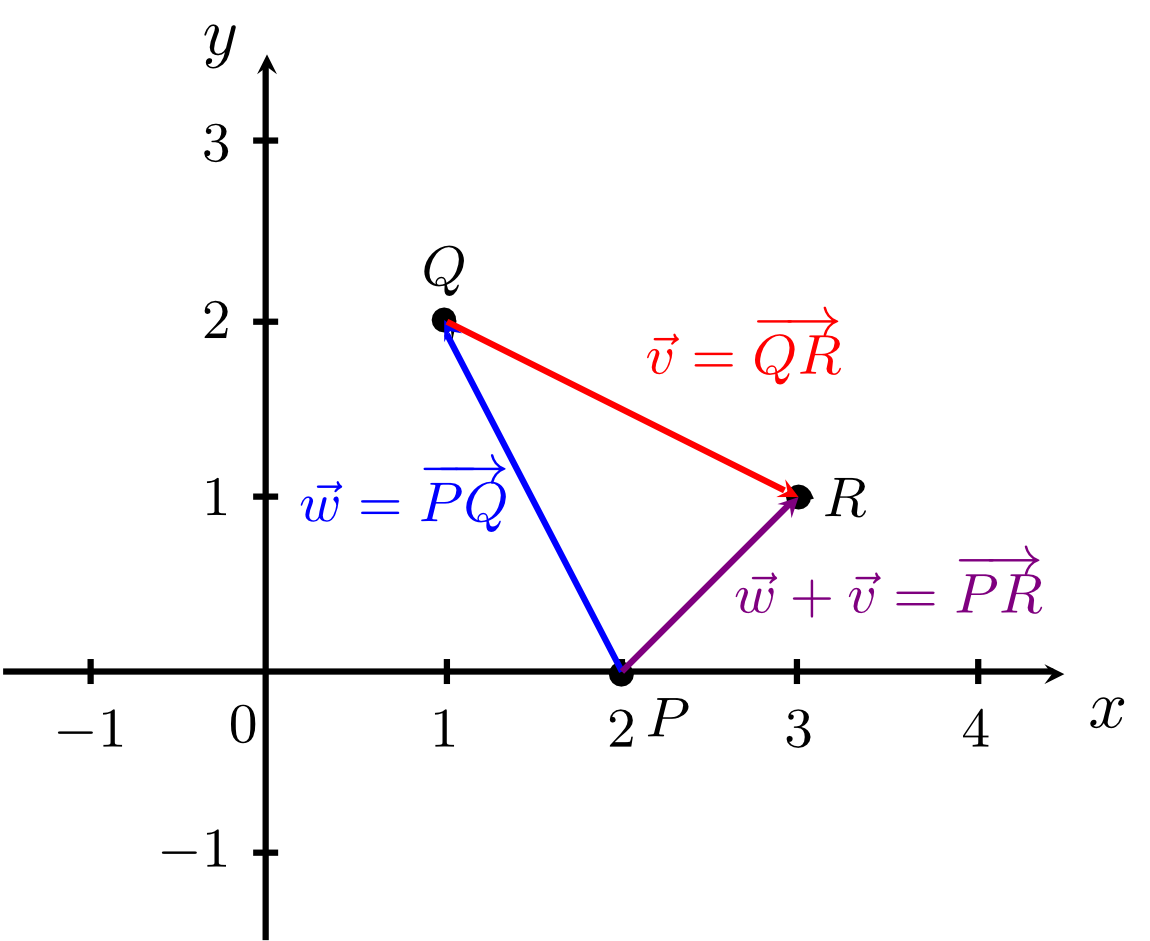 The example above shows that expressions for connecting vectors of points can also be simplified by means of vector operations. This will be discussed for the subtraction of vectors in more detail below.

When we study possible operations on vectors further, we will see that the component-wise multiplication or division of vectors is not a meaningful operation. To understand this, however, would go far beyond the scope of this course. At this point you simply have to accept that vectors cannot be multiplied that simply, let alone divided. What we certainly can do is multiply vectors by real numbers and - based on that - subtract vectors. Please note: if we speak of the length of a vector in the following section, we mean the geometric length of the arrows representing this vector. The concept of the length (a.k.a. absolute value or norm) of a vector will be discussed in more detail later on.


in the three-dimensional case. The division of a vector by a number is then simply defined as its multiplication by the reciprocal :


for every vector . Two other relevant cases are the multiplication by a factor of


- which obviously leaves the vector unchanged - and the multiplication by


- which results in the so-called opposite vector. This is a vector of equal length and opposite orientation. This is illustrated in the figure below.

Let the vector be given. Then, for example, we have


Moreover, for and since


This is illustrated in the figure below. 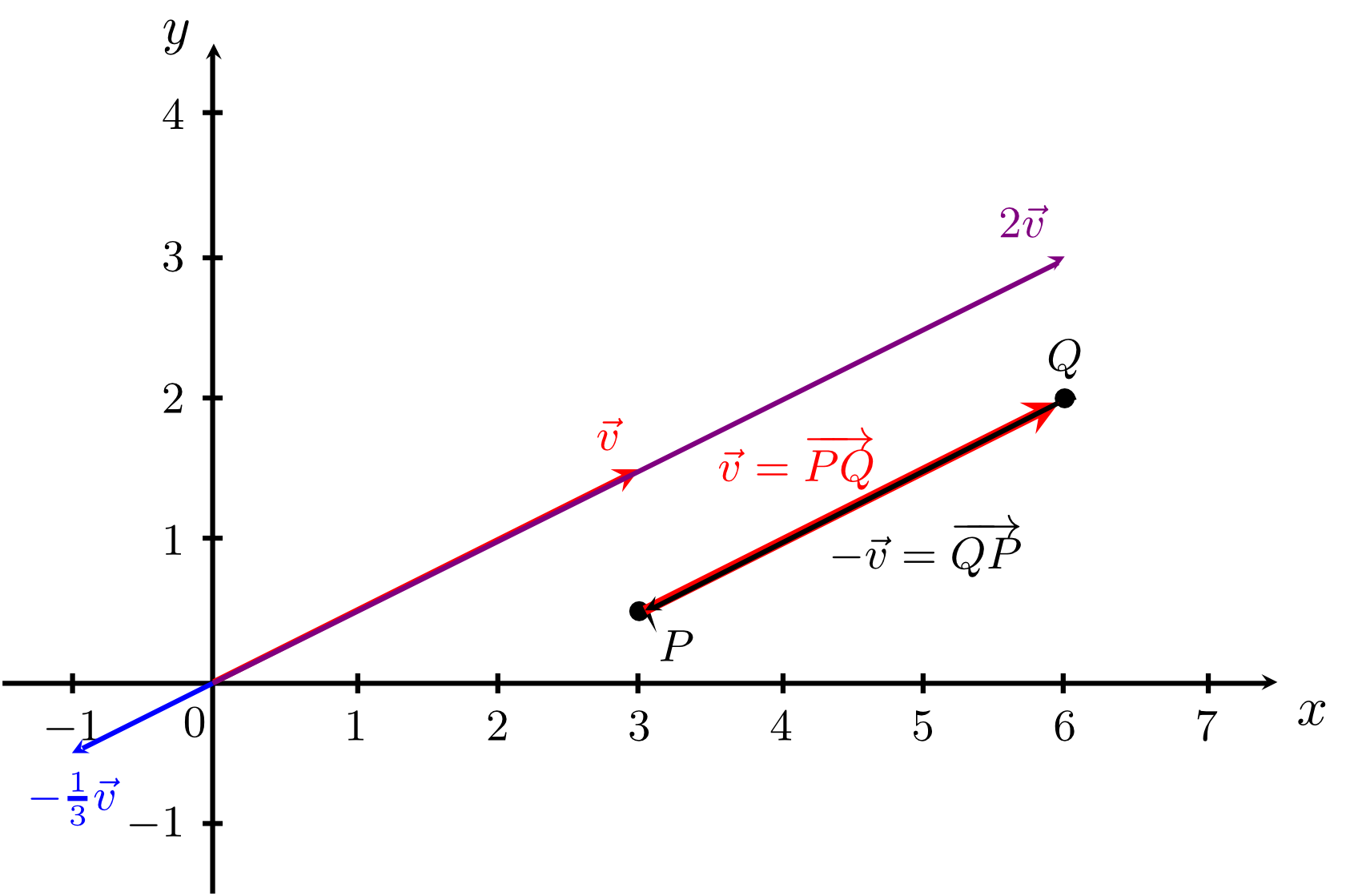 Let two vectors and be given. Then, their difference is the sum of and the opposite vector of . Thus, we have


in the three-dimensional case. The difference of vectors can also be interpreted geometrically by means of the representatives as illustrated in the figure below. 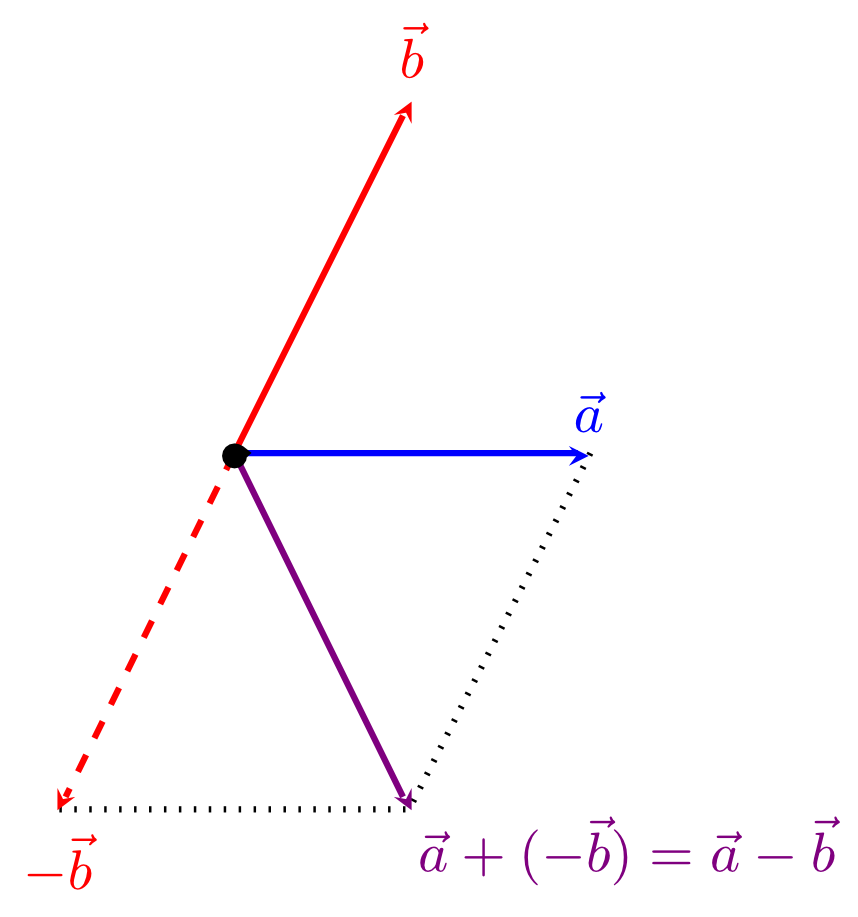 Simplify the following expressions as far as possible: Vectors can be entered as (a;b) or (a;b;c).

Find the vector in the equation

Since any vector has an arbitrary number of arrows as its representatives (which arise from each other by parallel translation), all these representatives have the same geometrical length (which is always the distance between the two points they connect). Therefore, it is reasonable to speak of the length of a vector. In mathematics, the length of a vector is called the absolute value or norm.

The absolute value or norm of a vector is denoted by and equals the distance between the origin and the point that has the vector as its corresponding position vector (i.e. ). Thus, we have generally


and hence in the two-dimensional case


or in the three-dimensional case 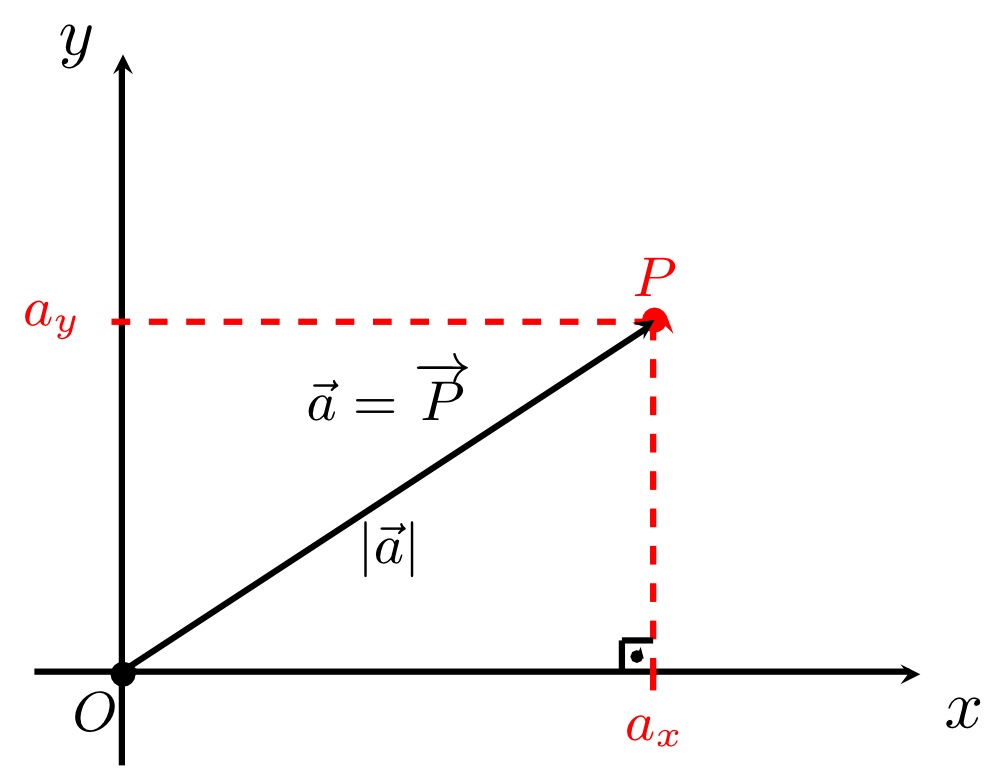 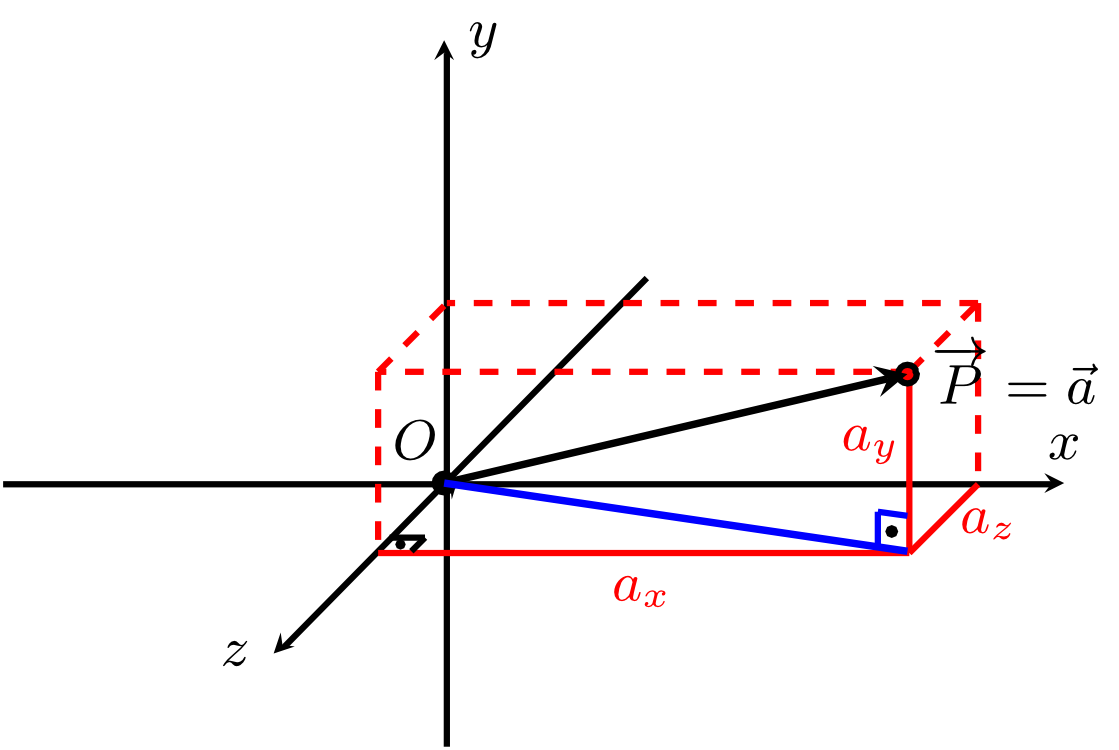 
For norms of vectors the following calculation rules apply:

Let two vectors and (both in or in ) and a real number be given. Then, we have: The first rule states that norms are always non-negative and that only the norm of the zero vector is . The second rule is especially useful in calculating the norms of constant multiples of vectors. The third rule is called the triangle inequality.

Find the number such that .
.

Show that the points , , and are the vertices of an equilateral triangle.
The triangle is equilateral if

Thus, the triangle is equilateral.