If one drives downhill on a road with a slope of five percent, then the height falls five metres for every 100 metres travelled horizontally. Here, the difference in height is considered in comparison to the horizontal line.

Accordingly, the slope is if the difference in height between two positions with a horizontal distance of is . Geometrically, the connecting line segment between the two points is a diagonal of a square. Hence, the angle between the horizontal line and the diagonal, i.e. the road on which ones moves, has a degree measure of . 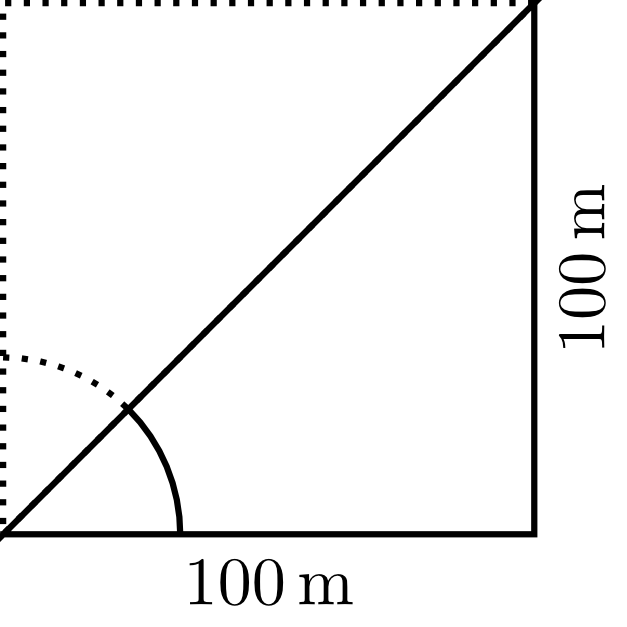 In other words: An angle of corresponds to a slope of , i.e. the ratio of the horizontal line segment to the vertical line segment is . According to the intercept theorem, this ratio does not depend on the lengths of the individual segments. It only depends on the position of the two rays with respect to each other, i.e. the measure of the angle they enclose. If this assignment of a ratio of the line segments to an angle is also known for other angles, many constructive problems can be solved. For example, for a given angle the height can be determined. Even the question for the ratio that corresponds to an angle of shows, however, that in general it is not that simple to determine the assignment of a ratio of line segments to an angle. Therefore, the time-consumingly determined values that we considered initially were listed in mathematical tables such that they could be looked up later again easily. Now, these values are available practically everywhere, provided by calculators and computers. The most common assignments of an angle to a ratio of line segments are presented below. They are called circular functions or trigonometric functions. The branch of mathematics dealing with their properties is called trigonometry.

Trigonometric Functions in the Right Triangle 5.6.1

Here, the most common circular functions are described as assignments of ratios of the sides in a right triangle to an angle. The circular functions are also called the trigonometric functions. Here, denotes an angle in a right triangle that is not a right angle. The opposite (side) is the side opposite the angle , and the other leg is called the adjacent (side). 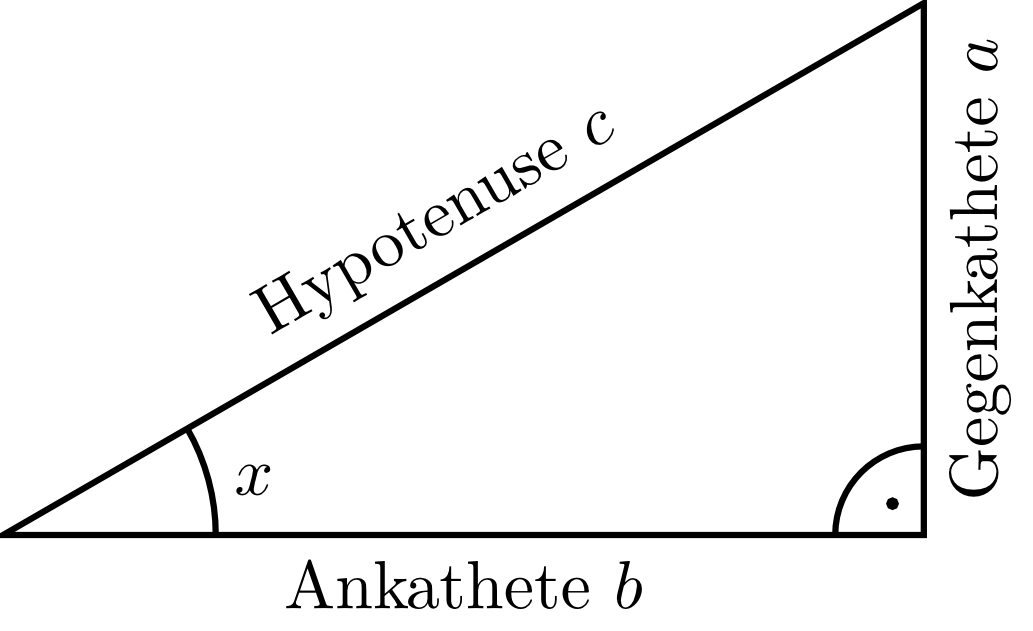 
Thus, it suffices to know the values of sine and cosine to be able to calculate the tangent function.


To calculate the cosine the length of the side is required - it can be obtained by means of Pythagoras' theorem:


Thus, the tangent of the angle is

Determine some approximate values of the trigonometric functions sine, cosine and tangent graphically. Let a right triangle with the hypotenuse be given. Use Thales' circle to draw right triangles for the angles


Use a drawing scale of unit length , and fill in the measured values for the sides and in a table. From the measured values, calculate the sine, cosine, and tangent of each angle and decide for which functions also values for and exist. After that, plot the calculated values of sine and cosine against the angle .
In the process of measurement, errors will always occur! Therefore, the values in your table will be slightly different from the ones given in the table below. The table could look as follows: Then, the corresponding diagram looks as follows: 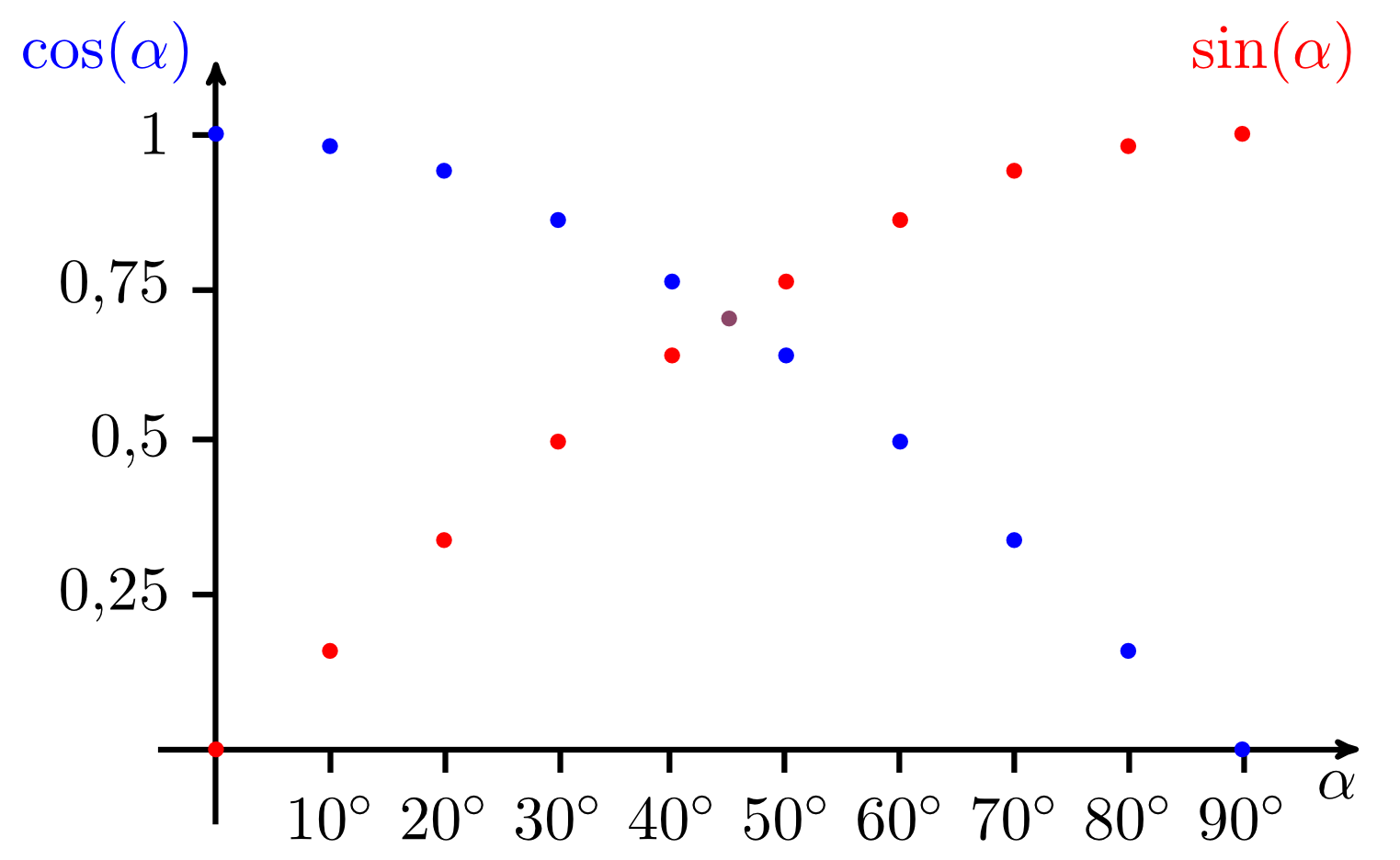 If we once again look closer at the results obtained in the last exercise, we can find different ways to interpret them, and then identify some relations. In the following example we will continue our considerations from the beginning of this section and use a triangle with an angle of to calculate the value of the corresponding sine value exactly.

Calculate the sine of the angle now exactly, i.e. unlike as in Exercise 5.6.3, where the sine was calculated from measured (and hence error-prone) values. If in a right triangle with the angle is equal to , then, because of the formula for the sum of interior angles in a right triangle, , the angle also needs to be equal to , and the two legs and are of equal length. A triangle with two sides of equal length is called an isosceles. In Exercise 5.6.3 the value of the sine of was approximated by a value of which is quite close to the actual value of .
In the next example we will calculate the sine of the angle . For this purpose, we first do not consider a right triangle but an equilateral triangle. By a clever decomposition of the triangle and by using another "auxiliary quantity" we will obtain the required result.

Consider a equilateral triangle to calculate . As the name implies, the sides of this triangle are all of equal length, and the angles are also all of the same magnitude, namely . According to the theorem for congruent triangles "sss", the triangle is defined uniquely by the specification of a side . This triangle is constructed by drawing the side and then drawing a circle with radius around both endpoints of the side. Now, the intersection point of the two circles is the third vertex. As a result we obtain the required value

Calculate the area of a triangle with the sides , , and the angle between the two sides and . Result:
The area can be calculated from , where we still need to determine . From we have