We start with a first example of a function as an assignment between two sets. For this purpose, we consider the set of natural numbers and the set of rational numbers , and visualise these two sets as two "containers" filled with numbers. 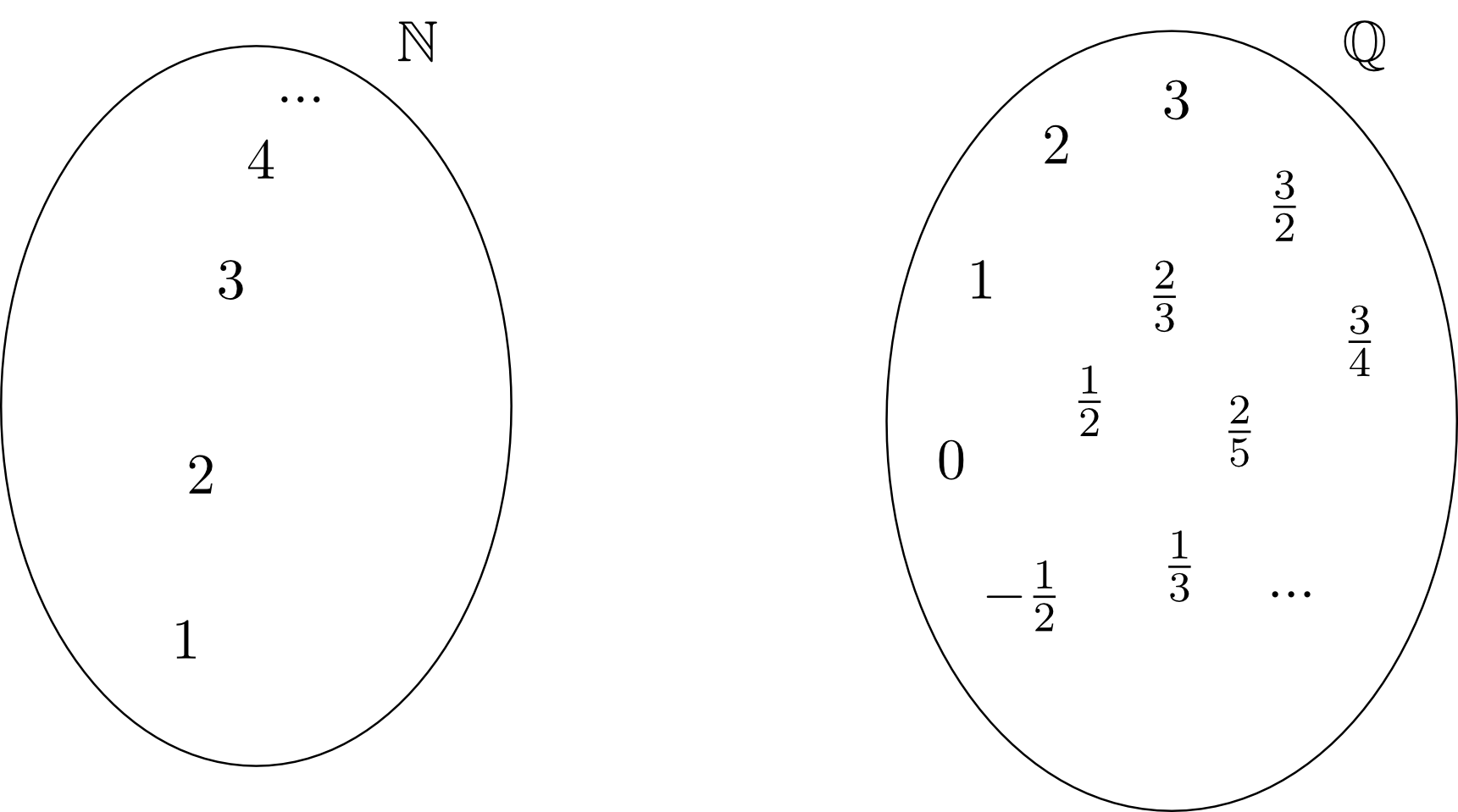 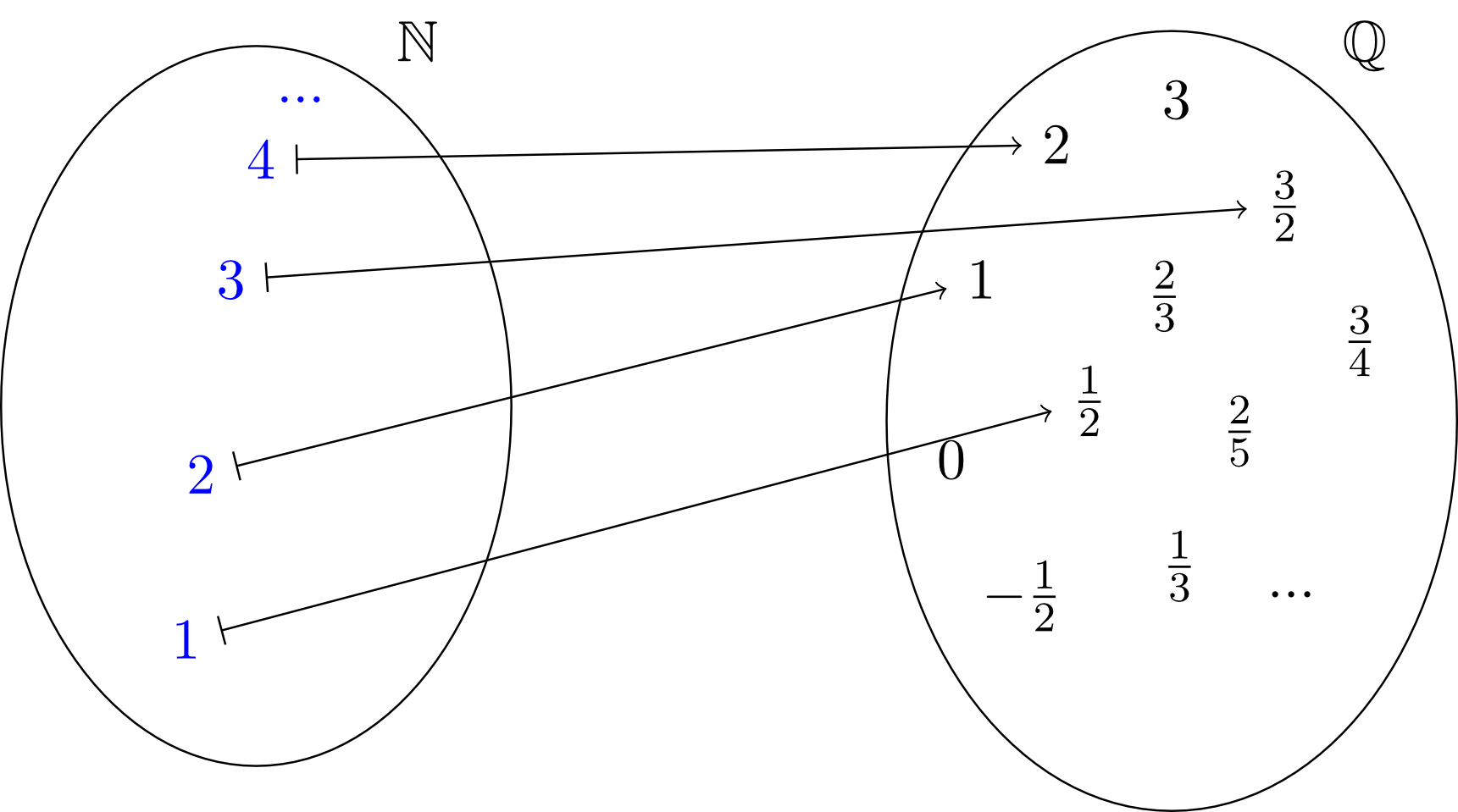 
With these assignments, we have now constructed a function from the natural numbers to the rational numbers . In mathematics, this assignment is named, i.e. a symbol is allocated (often this is for function), that shall describe exactly this assignment. For this purpose, the sets of numbers from which and to which the assignment will be done must be noted. In our case, to the elements of the set of natural numbers the rational numbers are assigned. Mathematically, this is expressed by a so-called mapping arrow , i.e. an arrow that has the target set at its head and the set, whose elements are assigned to, at its tail. Thus, in our case we have


This reads as "the function maps to ". Furthermore, we can now ask whether the assignments of this function, , can be described in a more compact way. To do this, we recall the beginning of this example. We decided to assign to every natural number its half . So we can write this arbitrary natural number and the corresponding rational number left and right to the assignment arrow, respectively:


This reads as " of equals ". Altogether we can describe this function as follows:


Finally, this reads as "the function maps to , each is mapped to ". Throughout this module, we will continue to use this summarising notation of functions. Let us consider a few further simple examples for functions.

The examples above show some basic properties of functions for which we will now introduce specific terminology.


in Exercise 6.1.5 is the set . There is also a specific term for the elements of the domain. In this exercise, the numbers are assigned by the mapping rule . Here, the variable is called the independent variable of the function .


hence and .
If we consider the mapping rule of the function, we see that there is no reason not to insert in any real number , excluding the value , since the operation "" has no solution. Therefore, in specifying the domain, we can distinguish between numbers that are excluded because they are not allowed to be inserted in the mapping rule at all and those that are excluded because the function is just defined accordingly. This now leads to the term of the maximal domain of a function, i.e. the maximum subset of real numbers that can be used as the domain of a function with a known mapping rule.

The maximum domain of the function

Find the maximum domain of the function

The square root has a real number as its result for all non-negative real numbers. Hence, .
For the definition of a function, a second set (beside the domain) is required, the set that is the target of the assignment by the function. This set is called target set or codomain. Let us again consider the function


in Example 6.1.4. Its target set is the set of real numbers . The target set of the function


in the first example of this section is the set of rational numbers . Here, we see an important difference between the domain and target set of a function. The domain contains all numbers, and only those numbers, that are allowed to be inserted (and one wishes to insert) in the mapping rule of the function. However, the target set can contain all numbers that can potentially appear as a result of the mapping function. In this context the question arises: What is the smallest target set that can be used for a function with given domain and known mapping rule? The smallest target set is the set of numbers that - for a given domain and mapping rule - indeed appear as targets of the assignment. This set is called range or image, and its elements are called values of the function. For a function , the symbol is used for the image. For the values of a function of an independent variable we write generally , as in the mapping rule, or we introduce another variable, e.g. .

Let us consider again the example


The range of this function is


This can be seen by inserting some values from in the mapping rule and calculating the results. In this way, a so-called table of values is obtained:
Such tables of values are useful to get an overview of the values of a function. However, from a mathematical point of view, they are not sufficient to be completely sure what the actual range of a function is. One method to determine the range of a function is based on solving inequalities:


due to the domain for the independent variable we have


Now, we use equivalent transformations to create the mapping rule in this inequality:


Hence, we have for the values of the function and therefore .